Mixed Reality's Contribution to the Field 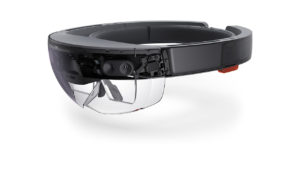 Microsoft just revealed its next iteration of the HoloLens, named HoloLens 2, in February, at the 2019 Mobile World Congress in Barcelona, Spain. “What is HoloLens?” you may be wondering. HoloLens is a Mixed Reality headset, developed by Microsoft, that lets you view and interact with holograms via displays built into the lenses that overlay onto your surroundings in the real world. Mixed Reality is defined by Wikipedia as “the merging of real and virtual worlds to produce new environments and visualizations where physical and digital objects co-exist and interact in real time.” This sounds like it might be too much like science fiction or something used for a video game, but it turns out there are many practical uses for this type of hardware. While there are bound to be entertainment uses for HoloLens; it is starting to gain traction in the armed forces, medical, manufacturing and construction industries. This is not to be confused with Virtual Reality, where you are in a controlled environment viewing a totally virtual space.

So how can this technology help with construction? Using Mixed Reality apps, you can view and interact with your blueprints and Building Information Models (BIMs) at the physical job site location, whether work is still being performed or has been completed. Being able to see your digital models or drawings in a physical space, at 360 degrees, allows you to quickly and efficiently transform your models on the fly to see how the changes affect the rest of your model and your surroundings all in real time. Since Mixed Reality lets you see the models for your work area through the lens display, you can effectively see any graphical data, as it’s represented, such as: rooms, pipes, cabling, ducts, etc., even if it would normally be concealed by a wall, floor, or ceiling panel.

As for the hardware itself, HoloLens is an impressive piece of technology; built and designed to let you see, interact and customize 3D holographic objects as though they existed in a physical space. To make this happen, it’s fitted with Microsoft’s Holographic Processing Unit (HPU), a myriad of sensors to understand the environment you are in, recognition for gestures and speech, and eye tracking to distinguish where your attention is focused. It also has built-in Wi-Fi, Bluetooth and a rechargeable battery, and does not require a connection to a PC to operate.

Hololens 2 takes the original formula and expands on its capability creating a more immersive experience. In addition to being a more comfortable and compact unit, the processor has been upgraded, movement detection has been increased, the microphone has been upgraded, and most importantly the security has been improved. Greater processing power means more holograms can be viewed at once and can be viewed at higher resolution, with more legible text. Holographic objects are more responsive to your interaction than the previous model. The improved microphones allow for better speech recognition in noisy areas, perfect for construction sites. Security is also improved, giving users the ability to log in using eye recognition rather than a user name or password.

You may be wondering about safety while wearing this headset in a construction zone. Trimble has developed an ANSI/ISEA certified hard hat solution that the original HoloLens can be mounted to, for areas that require a hard hat. They are also working on development of the XR10 hard hat for integration with HoloLens 2.

Other manufacturers like Acer, Asus, Samsung, Oculus and Lenovo are making their way into the Mixed Reality space as well but may not quite be as suitable as HoloLens in their current state. These solutions currently are not completely hands-free and must be connected to a PC to operate. If these features are not a concern, then one of these products may be a good alternative solution for you to use in the office. They are also notably cheaper but will not offer the same experience found on the HoloLens.

Just as PCs, mobile, and cloud technologies were slow to be adopted into the construction industry, Mixed Reality may take some time before it becomes mainstream. Those that do adopt this technology will have an intuitive, immersive, and interactive experience that will help modernize the way you do business. For more information visit Microsoft’s Mixed-Reality webpage (https://docs.microsoft.com/en-us/windows/mixed-reality/).