For the past decade or so, Intel’s flagship processor has been the Intel i7 product line. It has been touted as the best cost for performance processor in the industry time and time again, starting with the i7 2600K what seems like a century ago.

Intel’s processor design architecture has changed quite a bit since the beginnings of the I products. Starting with the 45nm 1st Generation, then the 32nm 2nd, 3rd, 4th and partially 5th generation, and the 14nm 5th, 6th, 7th, 8th, and now 9th Generation. Did you notice a pattern here? Each architecture of processing seems to extend over more generations then the last. With the current 14nm being repeated 5 times in a 4-year stretch.

This compelled me to investigate the reasons behind the seemingly rapid-fire release of three generations of processor in 2 years, as well as the lack of 10nm processor production in the chips (Something Intel promised over 2 years ago).

What I found, were two primary reasons for the current model environment. The first is harmless enough- Intel has had some serious issues with the yield quality of the 10nm process and as a result they have not been able to generate a stable 10nm processor that could be distributed to the public. The second is more questionable, and more concerning for the everyday consumer. Computer Techs and Information Systems Engineers are unlikely to notice the problem until after it is a problem.

The i7 processor is no longer an i7. Now, you might be thinking “what the heck are you talking about?” Well, let me show you. I’m going to use workstation processes and gaming as our examples to break this down so you can understand the real difference between the 8th Generation and 9th Generation i7.

One of the terms you may have heard in the past is “Hyper threading” or “Threads.” Until recently, these “Threads” were largely unused by applications and software; which largely focused on the performance of Cores instead. However, as predicted by AMD Technologies in 2011: games, 3D design, video and picture editing, 4K, and even production programs like Microsoft office have migrated to using multiple threads per core in processing power. The result is that Microsoft office 64 bit, which once used 4 Cores and 4 threads maximum; is now able, and even wants to use 8 cores and 8 threads for optimization and is compatible for optimization up to 16 Threads.

So why does this matter?

When a software or program attempts to execute on threads that a processor does not have, optimization encounters “Frame-Stutter” which to a user looks like the PC is freezing/locking up for a split second. We can see this happening using benchmarking software; below is an example from Tom’s Hardware. 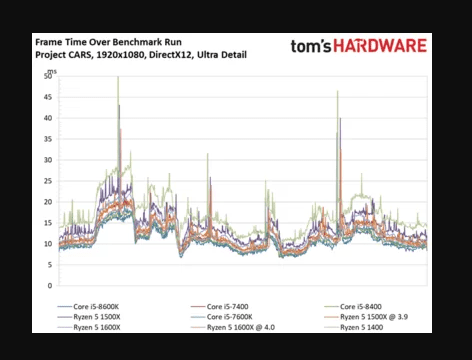 Each of the spikes in the graph indicates a point where the CPU hits frame-stutter and a delay in the next delivered frame occurs, effectively stopping or “stuttering” the motion on the user’s screen.

You may notice that all of the CPUs in the graph that hit this wall happen to be Intel’s core i5 CPUs. This is not surprising because Intel’s core i5 lineup is developed with just one thread per CPU core. So even the modern i5 6 core has only 6 threads. That’s a problem for the above application because the above application is designed for 8 thread optimization. Now, imagine this graph on a 12 or 16 thread optimized program and it’s not hard to imagine the problems this may cause down the road. Which brings us to the i7 9th Generation Processor. Rather than a lengthy dissertation, let me show you something…

Notice the highlighted fields? Now, let me show you something else…

And one more for comparison…

First off, Intel is not alerting consumers of this change; they’re not even alerting IT professionals of this change. Secondly, you may have noticed the i9 is about $200 more expensive then the i7’s of the past. Well, your eyes don’t deceive you. Intel appears to be using this move to slide the cost of processors up considerably.

In Closing, the i5 and i7 processors should be used carefully in user machines going forward and whenever possible the 8th Generation i7 variant should be preferable to the 9th, as it will likely have better performance and longevity than the newer 9th Generation. Users with significant multiprocessor workloads (i.e. many applications open at once) or intensive thread optimized programs should opt for a better solution than the i7 line. I have added a few processors below that generate significantly better performance for your money for this type of application.

Thanks to Tom’s Hardware and Userbenchmark.com for their comparison charts.