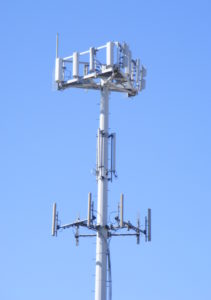 Citizens Broadband Radio Service (CBRS) is a revolutionary Long-Term Evolution (LTE) based wireless technology. CBRS utilizes a 3-tier shared spectrum model to generate new opportunity with the use and distribution of wireless access. The CBRS band will consist of 3550-3700 MHz, or 3.55-3.7 GHz. It is commonly referred to as the 3.5GHz band. This band has a total of 150 MHz of useable spectrum taken partially from 3GPP (3rd Generation Partnership Project) Band 42 and partially from 3GPP Band 43.

The spectrum sharing rules are defined to allow wireless broadband usage while also providing interference protection and uninterrupted use to incumbent users. This is crucial since Band 42 and Band 43 are currently utilized by the U.S. Navy and other DoD (Department of Defense) members.

In order to use the CBRS spectrum, the requestor must be authorized by a Spectrum Allocation Server (SAS). The SAS will analyze the radio frequency (RF) spectrum and available channels using radio propagation and terrain data before the request is authorized. If there is spectrum available, it will be made available for use by other requestors. Below is an image from Qualcomm depicting the tiered priority levels of the shared CBRS spectrum: 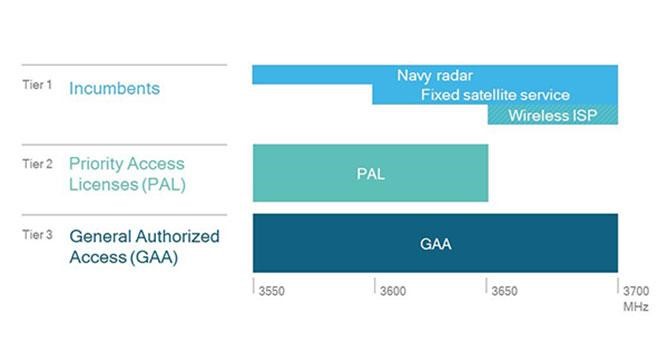 Incumbents are considered Tier 1 and have the highest priority level. They are considered incumbents because they have been using Bands 42 and 43 prior to reallocation (CBRS Band 48). U.S. Military Radars (on-ground, ship-borne) have access to the full 150 MHz of spectrum (3550-3700 MHz). There are 19 ships in the country that will use this spectrum located in Norfolk, VA; Seattle, WA; and San Diego, CA. There are also fixed satellite service Earth stations that are receive-only and will consume 100 MHz of spectrum (3600-3700 MHz). The final incumbents are WISPs (Wireless Internet Service Providers). There are thousands of WISPs, operating in mostly rural areas (3650-3700 MHz), whose priority will slowly be transitioned.  This will change WISPs from being considered incumbents and will reclassify them as Priority Access Licenses (PALs) or General Authorized Access (GAA).

GAAs are considered Tier 3 and will inhabit the rest of the available spectrum not used by higher tiers. If there is no Tier 1 incumbent use, GAAs are guaranteed eight 10MHz channels in a single limited geographic area.

The shared spectrum model has many advantages such as lowered barriers of entry, neutral hosts, and internet of things (IoT) application. CBRS will be used as a private and localized LTE deployment which is superior in quality, performance, and security compared to Wi-Fi. PALs will likely be used in remote or temporary deployments for industrial IoT applications in industries like mining, power plants, oil rigs, factories, and warehouses. There is also potential for CBRS to be used in households across the U.S., but this is yet to be determined as there have been limited deployments and PALs have yet to be auctioned. The good news is that there is plenty of infrastructure in the pipeline and there are already end user devices that support Band 48 (CBRS) such as Samsung’s Galaxy S10 and the Google Pixel 3. For smart home, enterprise or industrial IoT, urban or rural private networks; CBRS will be a growing deployment option.

Prepare Your Wireless Network for the Next Generation